This series highlights the many creative people representing hot style and insane skills in their respective fields. Why not be a stylish nurse or a dapper lawyer? Creativity sustains us all.

When thinking of how to begin this post, I am at a loss of an articulate introduction. All that comes to mind is, “This dude is rad. Totally.” Why bring out my 80’s/90’s cultural slang? In addition to a fun interview, I suspect it was due to the two records in juxtapose moment (photo below) that happily threw me.

More on that last moment later in the post. First, the back story of how this interview between presence 4.0 and Ryan came to be. It was through a simple request to pose for a painting series. Ryan is known for his pop art portrayals of askzaa’ saani (elder Navajo ladies), science fiction, and the image of a mutton stew can. The last example pays homage to Andy Warhol. The premise for this recent painting series: To capture Native ladies who embody a type of realness and style. So while presence 4.0 continues to capture those same types of people with our iPhones, it is synchronistic to be around an artist capturing the same point of view. 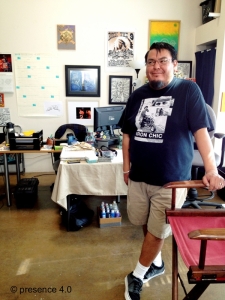 This short interview occurred simultaneously throughout the photo shoot. If you can’t tell by the photos, the interview was less about clothing style and more about his daily influence: music, but more specifically, old school music.

Let me break his style down for you: He describes his style as “old fart.” Then, laughing, he comments that the way he dresses is the same as he dressed back in high school: punk t-shirts, shorts, and Vans. The music he listens to definitely drives the way he finds t-shirts. He likes t-shirt designs adding that most of his t-shirts are DIY and wears “whatever is clean.” This mentality, however, is not shared with his wife, Nathania. “She likes to dress up, it’s a wow,” he notes.

The topic about clothing styles does not last long since he prefers to talk about good music, which, to him, spans from mainstream 80’s to older music in other genres. Essentially, it is not the music you will find playing on the radio today:

“I like all kinds of genres of music. It can be hardcore punk, old school street punk, artsy-fartsy punk and pop punk. I’ll listen to some Emo from the 90’s on occasion. I also listen to 70’s/ 80’s heavy metal to black metal, as well as, 80’s/ 90’s Alt Rock to some new Indie rock to blues; like, John Lee Hooker, Robert Johnson… What I don’t listen to much is country or hip hop… I do have some Public Enemy and Sugar Hill Gang… I find that Indie, independent or DIY, music is the best. [It is] music coming from your friends and their friends. I find this music to be pure and honest….”

And so, the photo shoot continued. That day, Ryan planned to photograph two models and the next lady was going to arrive within the hour. I came to find out each model has certain uniqueness in regards to style and self representation as Dine’: a photographer, a singer, and an academic.

Basically, Ryan’s new series will capture a similar sense of resilience, beauty, strength, wisdom, awareness and tenderness found in his Saani’ series. Hence, the series title, “Askzaa” meaning Navajo women. Reiterating that those saani’ were “young at some point back in the day…I am capturing the middle part of that life cycle.”

Our interview ended and we chilled. To keep the relaxed mood going, Ryan asked what vinyl to listen to next. The 80′s titles were listed and out came a personal fave, the Psychedelic Furs.

Now, the “whoa moment” mentioned earlier. We proceeded to listen to the Psychedelic Furs vinyl and continued to have an insightful conversation regarding culture and its continuity among our generation. Then, to my excitement, he shared one of his “finds” with me: an early 1970′s vinyl recording of Yei-bi-chei songs from Canyon Records, located in Phoenix, AZ.

How fitting to pull together his love for music by bringing out a Yei-bi-chei vinyl! In essence, those songs, in general (not just the vinyl) are the basis of Navajo stories and prayers. It was a real moment of connection between two Natives; it was awesome. The music Ryan chooses to listen to, including Yei-bi-chei songs, and people he surrounds himself with all serve a purpose of restoring his relationship with the social and physical world. And, that is the rad quality of Ryan.

*Refer to copyright information in the ABOUT section.

More about Ryan and his work can be found at http://www.ryansingerart.com