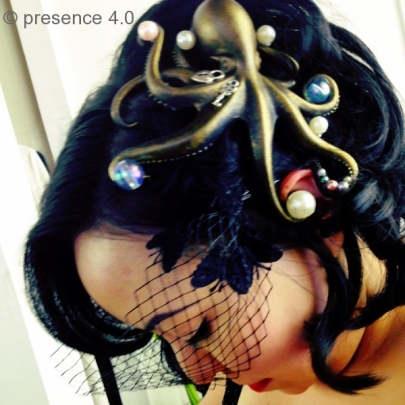 Tahnee loves to explore different styles. Her foray into different and new genres of music every two years is a large motivator to how she chooses to express herself. Rockabilly shows were a big initial influence, music and style-wise. The outfits she would choose for the shows, eventually, found their place in her everyday dress. Details of the pin-up style grew to include corsets and PVC clothing, which is associated with retro, goth, and alternative looks. But don’t confuse her style with “gothic” or “emo,” rather, she laughed calling it, “sophisticated emo.” Basically, she “likes clothing that complements [her] style and body structure.”

When she became engaged to her now-husband, Ben, she knew black would be part of her wedding dress. The couple, with respect to their families, agreed on one aspect: They wanted a different style of wedding that wasn’t normal by mainstream or Navajo preferences. She adds, it is not that she did not want to have a traditional Navajo wedding; she is traditional in other ways. Simply, they “chose to do this [type of] wedding more for the both of [them].” It represented them, especially their style. This is very apparent in the behind-the-scene wedding photos presented here.

She found much of her Victorian-goth inspiration from online photos since she didn’t want to wear white or anything deemed traditional. Etsy was the answer. Each piece of her wedding outfit was sourced from a different company. The corset and skirt were handmade; the corset traveled from Germany. Her necklace and octopus hairpiece also came from Etsy. The shoes were from EBay and the only item that was not from Etsy. The end result is the unique blend of detailed sewing and black lacing – gorgeous and perfect.

At the end of our conversation, she reveals when she is visiting her hometown of Window Rock, AZ, she will wear jeans and a t-shirt with gold skeleton socks. Interestingly, she is not a skull nor a skeleton fanatic despite gifts from friends.

Curiosity about the skeleton socks led to a question about her cultural understanding of the Navajo taboo of death, and more specifically, its association with skeletons. She answered that growing up, her mother and father did not overemphasize this taboo. Here are Tahnee’s words: “My mother said not to be around skulls without going into too much detail. My parents didn’t really discuss too much of the traditions and taboos [with me]. If I were to see a real skull or skeleton in real life, I’d freak out and I would know not to touch it. But on clothing, I’m not affected as opposed to others who are more traditionally-minded. [The use of skeletons as a design] is pretty much everywhere now.” To her, it is a symbol that she is true to herself and quite comfortable being different.

Tahnee’s candid remarks are shared with some Natives of the same generation. Our cultural differences are laid on the foundation of our personal experiences, our families and their own experiences with society- no one’s story is entirely right or wrong. In the end, Tahnee married someone who completes her sense of style, morals, and ethics. And, that type of love is remarkable.

*Refer to copyright information in the ABOUT section.